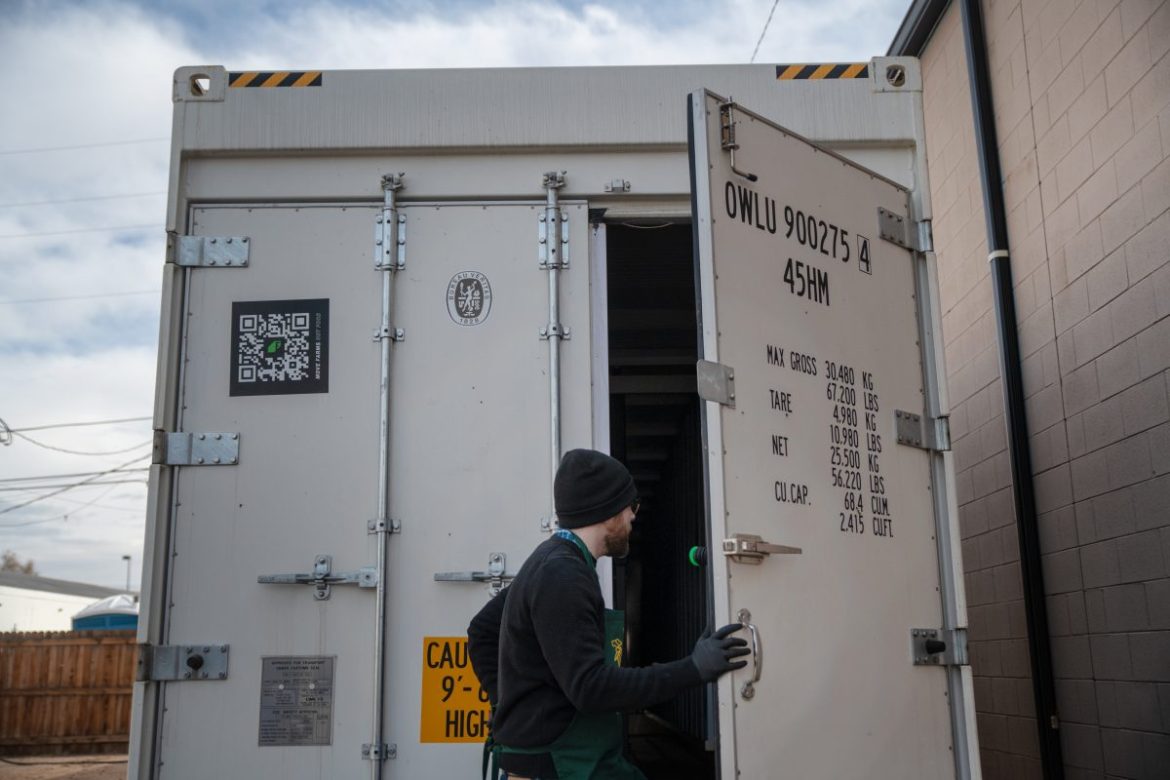 The lettuce is blooming nicely on the rollaway walls.

According to the farmer’s iPad, the calibrated nutrients are flowing smoothly and accurately through the tubes.

It’s 30 degrees outside, but there’s a tantalizing garden of tangy, restaurant-ready produce inside this cozy, pristine shipping container.

Somewhere behind and among the pawn shops and the gas stations and the used tire traders and the body shops along South Broadway, on a former used car lot on Acoma Street, a couple of snazzy high-tech containers are parked to start an urban farming revolution.

It’s not hard to see pretty quickly that you can produce, per square foot, way more food in these containers than you can in the field

Ullr’s Garden, launched a few months ago by a couple of brothers who want to save the world and sell some sustainable arugula, is growing the equivalent of a 10-acre farm on a dusty 7,500-square-foot lot. The lettuce and arugula and basil and romaine grow horizontally, while hanging from moveable walls packed inside the climate-controlled trailers. The farmers sit at a folding table in the nearby shed and plot their next expansion: stackable farm containers.

“We are growing local produce, in the middle of Denver, on an old used car lot, the kind you used to roll your car windows up when you drove by,” Millisor laughs.

And their stuff tastes great. The emerald green basil snaps with a hint of licorice. The arugula is laced with a wild mustard flavor. The butter lettuce, sold with root ball intact, has an earthy flavor belying the fact the growing walls are purposefully insulated from any local dirt.

One trailer with 365 days of optimal growing conditions can produce the equivalent of a 5-acre seasonal farm, Nick and Luke Millisor say. Employing a closed loop for the water and nutrients, each trailer uses up only five gallons a day from water buffaloes they fill offsite.

“We don’t even have a water tap here yet,” Nick laughed.

And when the weather turns truly frigid, say 10 degrees from Thursday’s overnight snow, a conscientious farmer can check on the baby bibb while sitting at home in bed with a laptop.

“If anything isn’t running optimally, the farm will literally send me a text message,” Nick said, waving his iPhone over the transplanting tables. Sensors throughout the trailer are connected to wi-fi.

Independent experts on vertical hydroponic farming say they can’t predict the success of Ullr’s business model, but agree the revolution in well-designed shipping containers could indeed preserve the environment and extend better nutrition to remote consumers.

“It’s not hard to see pretty quickly that you can produce, per square foot, way more food in these containers than you can in the field,” Craver said.

The Ullr’s Garden name for their parking lot container farm honors the brothers’ time growing up skiing in Breckenridge, home to the Ullr Fest winter sports party. Nick Millisor comes at farming with all the technical skills of a self-described liberal arts eclectic and sci-fi nerd. He’d been toiling in real estate when the strange winds of COVID and climate change turned his 2021 upside down and he went in search of a meaningful project to better the world.

The post Vertical Hydroponic Farming How two brothers plan to save the world by packing a whole farm into shipping containers on a Denver used car lot appeared first on GROZINE.